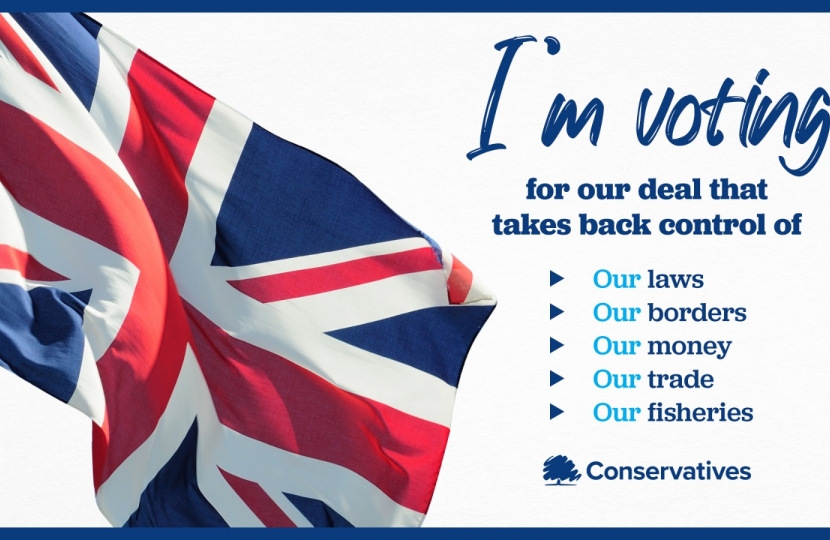 Today has been a historic day as Parliament votes on legislation to implement the agreement on our future relationship with the EU. It is, most importantly, a day that offers us a chance to end not just the last four years of discord, but the last forty.

This one issue has dominated almost all of my time as your MP over the last four years, one during which I have consistently pointed out that I do not believe that the two sides in the referendum are as far apart as they often think, and that a compromise negotiated outcome was the best way to deliver on the result of the referendum, whilst respecting the concerns of those who voted to remain.

And so it is, above all, with a deep sense of relief that I feel that we have finally reached the point where we can now leave the labels “Remain/Leave” behind us. It is therefore with a passionate desire to look forward with optimism and hope that I write this today.

Now that I have had chance to go through the proposed agreement in detail, I wanted to explain here what it means for us all and why I welcome and support it. Indeed why, this, afternoon, I supported the Prime Minister and voted for the European Union (Future Relationship) Bill - the Brexit “deal” - in reality a free trade agreement - negotiated by this Government with the EU.

But before I do that, I need to be absolutely clear that there were only two options on the table today: to vote for this Bill to implement the deal, or vote against it, which would have meant that we lived without a trade deal. There is a certain irony that those who have spent four years telling me that no deal would be a disaster, are now calling for me to vote against this deal - which would most assuredly result in the “no deal Brexit” that they claim is all they are against.

I remain of the view that a negotiated, compromise agreement is the best way to move forward, and I believe that this free trade agreement is just that deal, and I recommend it to all my constituents, for these reasons.

I feel that our negotiating team has done an amazing job. We have agreed the biggest trade and cooperation deal in the world, on a huge range of issues relevant to everyone in our country, in record time and in hugely challenging conditions.

This free-trade agreement achieves trade freely and in close co-operation with our European friends and partners, but on the basis of sovereign, independent countries. We were told this was not possible, but it always was - and here it is. We were told that this could not be achieved in the time available - it has been and we have proved those views wrong. We were told that the EU would not agree a deal with zero tariffs and quotas - they have, for the first time, done precisely that, in an agreement that is not just “Canada-style” but “Canada plus plus” - precisely what many of us have argued for so long was the best way to resolve Brexit.

This free trade agreement is the biggest the World has ever seen. In many ways it goes way beyond a “standard” free trade deal, offering the close trading relationship that I always campaigned for, whilst ensuring full democratic accountability, so that the representatives that the British public send to Westminster are those that make the laws that govern us.

So what does this free trade agreement give us?

A massive part of this new trade deal - which is the largest in the World (worth over £660 billion a year), is the no tariff and no quota access that the UK will have to the EU market. This has been agreed for the first time in the history of EU agreements, and is something that many said could not and would not happen. It has.

It secures our pledge to protect and boost our economy and provides for continued market access across a broad scope of key service sectors, including professional and business services. This market access will support new and continued investment between businesses. It also means that business travellers will be able to easily move between the EU and the UK for short term visits and the agreement on financial services ensures financial stability and consumer protection.

Moreover, this deal offers cooperation in many spheres including science and academia to security and policing structures. It provides for the UK’s participation in certain EU programmes, furthering our commitment to making the UK a science and research superpower. This deal will fulfil our manifesto commitment to participate in the Horizon Europe programme, but also the Euratom Research and Training programme, and the space programme, Copernicus.

The agreement delivers on our commitment to maintaining high labour, environment and climate standards without giving the EU any say over our rules.

This agreement delivers for our citizens, making our daily lives easier. It includes arrangements for airlines and hauliers that provides them with certainty, and gives people the ability to travel to and from the EU easily for work and holidays; a social security agreement that has practical benefits for UK citizens including accessing healthcare when travelling in the EU; and agreements on energy which will benefit consumers by helping to keep prices down.

It allows us to introduce our own modern subsidy system so that we can better support businesses to grow and thrive. This new subsides system will operate in a way that best suits the interests of UK industries - outside the EU State Aid regime.

On fisheries, admittedly not the biggest issue in West Oxfordshire, but one that is of great concern nationally, we have agreed a new settlement with the EU which takes back control of our fishing waters, and which will ensure that our fishing communities will enjoy all the benefits that come from being an independent coastal State. Throughout the negotiation the EU’s position did not reflect that outside the EU, the UK would be an independent coastal State and no longer bound by the Common Fisheries Policy (CFP). That has now changed. British fishermen will receive 25% of EU boats' fishing rights over the next 5 years, an increase on the current position. After this transition period, the UK takes back control of its waters.

For those who share my passionate desire that any agreement does not impinge upon democratic accountability and our ability to make our own laws by the elected representatives we send to Westminster, I am happy to confirm that this agreement delivers for them:

In essence, the Agreement preserves the UK’s sovereignty as a matter of law and fully respects the norms of international sovereign-to-sovereign treaties. It is based on international law, not EU law. There is no role for the European Court of Justice and no requirements for the UK to continue to follow EU law.

This agreement is a huge step forward. It delivers on the fundamental principle of the UK becoming an independent sovereign nation, controlling our own laws by the representatives we send to Westminster, whilst continuing a close trading relationship with the EU without tariffs or quotas in trade. Ultimately, this is a fair deal, greatly benefits both sides and allows us to work together on our shared interests, as equals, without a political union.

Today we open a new chapter in our national story, one in which global Britain is a liberal, outward-looking, positive force for good. Brexit of itself offers us the chance to take the decisions that are best for us, but it does not do so on its own - it now is up to us to come together to make the decisions that drive this country forward to the bright future that is on offer.

This is a historic day for our country and I trust we can now put the divisions of the past five years behind us and work together to make the very best of the huge opportunities we have for the future for our wonderful country, and for our own West Oxfordshire.

You can read the Prime Minister’s speech this morning, here: https://www.gov.uk/government/speeches/prime-ministers-opening-statement-to-the-house-of-commons-on-the-uk-eu-deal-30-december-2020

And you can read the entire agreement at the following link, but given it is 1,246 pages long and I have gone through it for you, you might want to read the summary explainer, which is also here: https://www.gov.uk/government/publications/agreements-reached-between-the-united-kingdom-of-great-britain-and-northern-ireland-and-the-european-union