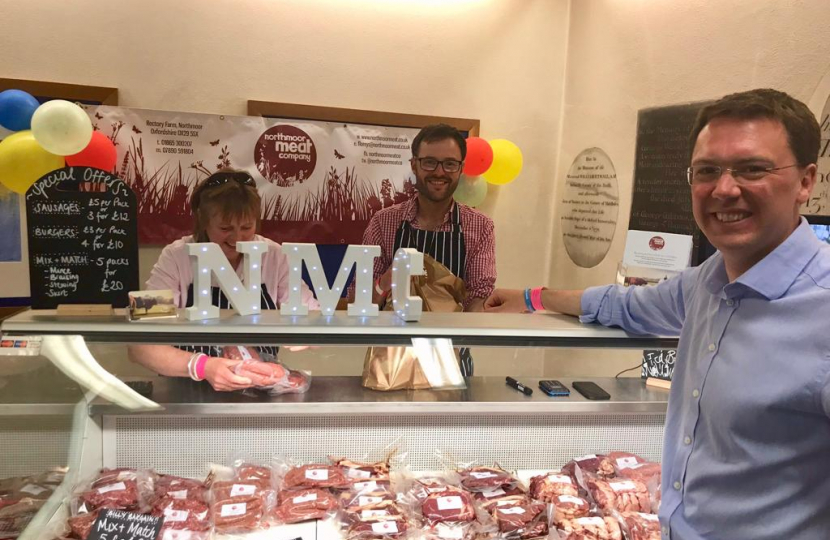 Robert has joined with Conservative County Councillors to launch a petition which calls on the Liberal-Labour-Green coalition leading Oxfordshire County Council to start supporting local farmers and food producers.

The petition has been launched in response to the County Council’s heavily criticised ‘vegan-only’ policy, which has triggered protests from local farmers and food producers.

A recently passed Council motion, opposed by Conservatives but backed by Liberal Democrats, Labour and Greens, means that only vegan food will be provided at Council meetings and events. The first of these vegan lunches was provided at County Hall this week, with the the so-called ‘environmentally-friendly’ spread featuring exotic imported fruits such as melon, mango and kiwi fruit.

The petition calls on the County Council to recognise the importance of farming to West Oxfordshire’s local economy and identity, and to start supporting local produce.

Commenting on the petition, Robert said: "The Liberal-Labour-Green coalition running County Hall are completely out of touch with the people of West Oxfordshire.

“West Oxfordshire’s farmers are at the heart of our area’s identity and rural economy, while also maintaining our world-renowned countryside and the wildlife which inhabits it. While West Oxfordshire residents recognise the value of local farmers to our rural area’s economy and identity, those running County Hall seem intent on vilifying our local food producers.

“How can it possibly be environmentally-friendly to replace home-grown West Oxfordshire produce for mango imported from South America?

“Not only does their condescending attitude trample over West Oxfordshire’s rural heritage, it punishes our local farmers at a time when they most need our support.

“Our petition therefore calls on County Hall to start supporting our local farmers and championing their high-quality, nutritious produce.”

Commenting, Conservative County Councillor Liam Walker said: “I think this new Lib Dem/Green/ Labour alliance have completely misread the room. Not only do they ban meat from Council meetings claiming it’s about tackling change, only for a few weeks later a cabinet member to jump on a plane to a climate change conference. Now they are boasting on Twitter about a vegan taxpayer funded buffet at council meetings.”

“Personally, I think these free meals at our meetings should be scrapped as councillors are perfectly capable of arranging our own lunches. This is a complete waste of money, and the coalition should be focused on tackling the serious issues in Oxfordshire like supporting the many residents struggling with food, fuel, and heating bills.”

The petition of residents of Witney and West Oxfordshire,

Declares that West Oxfordshire’s farmers are vital to our local economy and identity. They produce high-quality, nutritious food while providing stewardship over the precious countryside which makes our rural area so special.