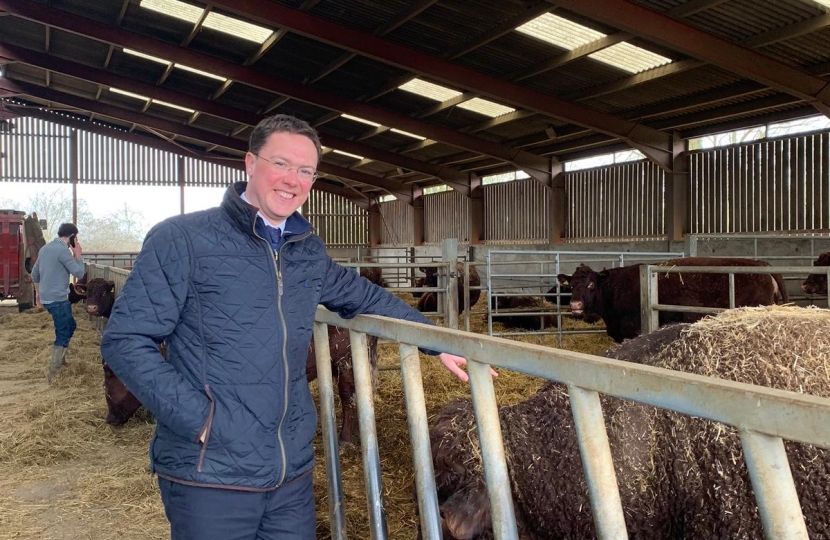 A number of constituents have contacted me in recent days with regard to maintaining food standards ahead of any future trade deals. There has clearly been a great deal of misinformation spread about this matter so I am setting out my detailed position below in an effort to address and clarify the various issues that have been raised.

At the outset please allow me to stress that I strongly value the UK’s agricultural sector and our high domestic standards - particularly food standards. The UK is a high quality and competitive producer and exporter of agricultural and agri-food products and this will always be the case, not least because these standards are a major part of the appeal of UK products.

British consumers want high welfare produce and if our trading partners aspire to sell to the UK market, they should expect to meet those standards.

The manifesto upon which I was elected to serve as your Member of Parliament was clear that: “In all of our trade negotiations, we will not compromise on our high environmental protection, animal welfare and food standards.”

That commitment stands and I know the Government will stand firm in trade negotiations to ensure any deals live up to the values of our domestic farmers and consumers.

All food coming into this country will be required to meet existing import requirements. The EU Withdrawal Act will transfer all existing EU food safety provisions, including existing import requirements, onto the UK statute book. These import standards include a ban on using artificial growth hormones in domestic and imported products and set out that no products, other than potable water, are approved to decontaminate poultry carcasses. There is therefore a ban on chlorinated chicken, for example, as a matter of law, as it stands. It does not need introducing. Decisions on changing any of these standards would be a matter for the UK Parliament and would be made separately from any trade agreement.

There has been a great deal of misinformation spread about the consequences of a potential free trade agreement with the United States, so the I hope the above has been helpful in clarifying the following:

To provide further reassurance on this matter, a Trade and Agriculture Commission has now been launched which will ensure that the voices of the public and industry are heard, and that their interests are advanced and protected. It will advise the Government on how Britain can remain a world-leader in animal welfare and environmental standards, and how we can seize new export opportunities for our farmers.

I am aware of the various amendments proposed by the House of Lords to the Agriculture Bill, which I believe risk adverse effects. The amendments go much further than insisting upon high food import standards (the standards that we expect incoming goods to meet if they are to be sold in our market) but instead seek to reach into a potential trade partner’s economy by specifying precisely how their businesses must produce their goods in order for us to trade with them. Simply put, they would require a potential trade partner not only to produce goods which meet our food safety and import standards (something we all agree with) but would require them to produce goods according to domestic UK production standards, regardless of whether the same high food standards are reached at the end of the day through slightly different routes, according to culture, geography or taste.

Such conditions are not in place for imports under agreements negotiated during our membership of the EU. Indeed, we currently import food from countries such as Canada and South Africa under preferential agreements negotiated by the EU, and none of these agreements include a requirement that these countries follow domestic UK production standards. Much of the chicken imported into the EU (and therefore sold in the UK) comes from Thailand and this is not produced according to EU production standards.

No sovereign, independent country would allow another to regulate its own economy in the way that these amendments suggest we should demand of a future trading partner.

So, as well as effectively banning much of the food we already import from around the world, these amendments would prevent the Government from being able to secure fair and reciprocally beneficial trade deals, which of course, to some people, is precisely the attraction of them.

Furthermore, the amendment changing the role and structure of the Trade and Agriculture Commission is unnecessary given the strength of membership, its broad representation and extensive remit. I am content that the UK will maintain a strong institutional framework for upholding the quality and safety of the food we import and consume through a range of Government departments, agencies and bodies such as the Food Standards Agency, Food Standards Scotland, the Animal and Plant Health Agency, the Veterinary Medicines Directorate and the Health and Safety Executive. Please be in no doubt that the UK already has the right to ban unsafe food and this will remain the case.

For these reasons, I am pleased that the House of Commons rejected these amendments last night.

I fully support the Government in its commitment to upholding our standards and for doing so in a way that is flexible, liberal, and allows for regional differences in pursuit of these high standards. This approach will ensure that our future trade agreements maintain our high food standards while seizing global export opportunities that benefit our brilliant farmers.

I do strongly believe in the liberalisation of world trade - because that has brought untold benefits and wealth to peoples the world over, particularly the poorest - but that has never been and should never be thought to be at the expense of standards.