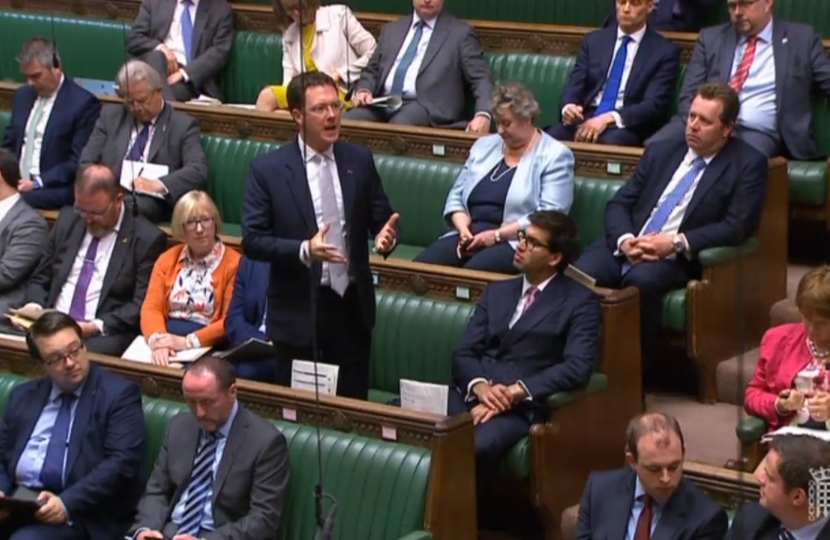 During Prime Minister’s Questions this afternoon, Robert asked the Deputy Prime Minister, David Lidington – who was standing in for Theresa May and represents Aylesbury in Buckinghamshire – to join him in paying tribute to the “ordinary - yet extraordinary - men and women” who participated in D-Day and “turned the tide of war in freedom’s favour.”

Robert paid special tribute to the D Company, 2nd Airborne Battalion of the Oxfordshire and Buckinghamshire Light Infantry regiment who, 75 years ago tonight (05.06.19), participated in a glider-borne assault that successfully liberated Pegasus Bridge just outside Normandy. Robert noted that the Operation represented “the first step in the liberation of Europe”.

D Company, which had done part of its training for ‘Operation Deadstick’ at RAF Brize Norton, was flown in by six Airspeed Horsa gliders, which were towed across the English Channel by Halifax bombers and released to glide silently to the ground when they crossed the French coastline just after midnight on June 6, 1944. Operation Deadstick was highly daring, involving landing 139 soldiers deep behind enemy lines under the cover of darkness – and was fittingly described as one of the “most outstanding flying achievements of the war”, by Air Chief Marshal Sir Trafford Leigh-Mallory.

The Ox & Bucks Light Infantry were reinforced half-an-hour after the landings by 600 men of 7th Battalion, the Parachute Regiment who helped to hold and secure Pegasus Bridge from German counter-attacks.

Speaking after PMQs, Robert said: “the strategic importance of the Ox and Bucks Light Infantry regiment successfully capturing the river crossings around Normandy – in what was the very first operation of D-Day – truly cannot be overstated.

“I was honoured to draw attention to this vital mission 75 years to the day that it was undertaken – and to pay tribute to the brave men and women of our county, our country and our allies who liberated Europe and gave their all for the cause of freedom.”

You can read the Hansard transcript of Robert's question here.