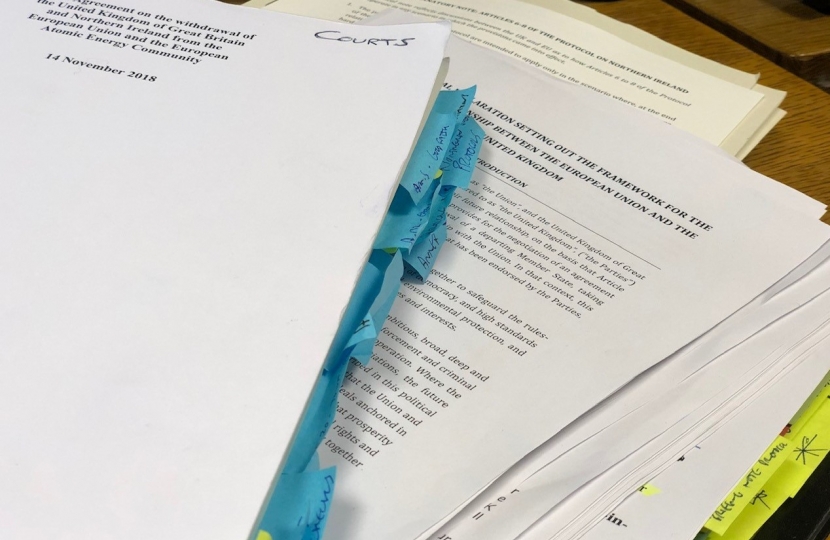 Constituents are understandably anxious to learn my views on the Withdrawal Agreement between the UK and the EU.

There are in fact two documents: the Draft Withdrawal Agreement, which is over 500 pages long, and the 26 page Political Declaration on the future relationship, which was published earlier today.  Indeed, I write after having just listened to the Prime Minister deliver a statement to the House of Commons on the latter.

It is important to make the distinction that only the Withdrawal Agreement is legally-binding.

Many constituents contacted me within minutes of the Agreement being published last week, urging me to reject it or accept it.  I have not joined colleagues who have come racing out of the traps on one side or the other.  Instead I have studied this mammoth document in detail, employing my own legal training and reading the opinions of others to fully understand its legal, as well economic and political, implications. I have read and re-read these documents, spoken to Ministers and colleagues from both sides of the debate, listened to Government briefings and read commentary from all sides.

At the outset, it cannot be stressed strongly enough that whether anybody approves or disapproves of the “deal” that has been negotiated should have nothing to do with whether they voted Leave or Remain. For example, Leavers have been joined by committed Remainers such as Jo Johnson, Damian Collins and Dominic Grieve in criticising the approach taken - or even refusing to support it. Equally, there are Leavers, like Michael Gove, who do support it.

Secondly, this is not about whether leaving with or without a “deal” is desirable - personally, I have always been clear that I wanted one - but whether this deal is one that establishes an acceptable future for our country.

In short, this is about the way in which the UK will be governed in future, and the democratic accountability that will exist between the public and those who make the laws that we all live under.

Having taken the time to study this document in detail, it should be noted at the outset that there are very many aspects of the transition period part of the Withdrawal Agreement that are pretty difficult to welcome. This was however always likely to be the case, given that the Government accepted long ago, for the purposes of providing business with some certainty, that there would be a “transition period” of around two years, whereby Britain remained subject to exactly the same EU rules and obligations as we do now, but without being a member.

The most important issue is therefore whether these drawbacks are things that can be tolerated in the short term, provided that the withdrawal deal is just that - a temporary withdrawal - and paves a clear path to a more acceptable future relationship or whether, bluntly, Britain can leave the deal if it chooses to do so.

With this in mind, I have three significant concerns, centred on two key aspects of the Agreement: the “backstop” and the provisions for Northern Ireland.

Firstly, the “backstop”. This is a provision whereby, if the UK and the EU fail to agree a future trading relationship, the whole of the UK enters into a customs union with the EU, which is supposed to prevent a “hard border” in Northern Ireland. My view is that this is wholly unnecessary, but we do not need to consider that aspect for these purposes - it is in the agreement and we have to consider whether it is acceptable. What is important to understand is that membership of a customs union involves surrendering control of the UK’s tariff schedules, and consequently of trade policy, and would involve our market being open to the EU’s third party partners, but without our having access to theirs. It is therefore very unattractive, and the UK would need to know that it can leave it.

The backstop proposals amount to indefinite UK membership of a customs union, with the EU holding a veto over our ability to exit.  Even under Article 50 we have a unilateral right and a clear mechanism through which to leave, but not here.

Why does this matter? Leaving aside the obvious point about sovereign, democratic control, the backstop arrangement also stacks the next phase of the negotiations against us, extinguishing much of our leverage on top of the £39bn payment that we will have already agreed to pay.  The EU will have no incentive to offer us favourable terms, knowing that failure to reach agreement on our future relationship will only result in the UK defaulting into a position of essentially non-voting membership of the EU which we have no unilateral ability to exit.

Secondly, this arrangement is identified as the starting point for negotiating our future relationship with the EU, potentially jeopardising the next round of talks before they have even started.  The Political Declaration states that our future economic partnership will “build and improve on the single customs territory provided for in the Withdrawal Agreement.” This rather suggests that membership of the customs union – or a hybrid equivalent – will be a feature of our future relationship with the EU.

With those three points made, I am conscious that the Government has yet to publish several things that will be very important. The first of these is what has been called its legal “position statement.” This is something that I called for, to ensure that we all understand the Government’s legal case; in other words, why they think that Britain will be able to leave the backstop as a matter of law - so we can all scrutinise that position.

Secondly, the Government is due to publish the Attorney-General’s legal advice - and given my concerns as expressed above are largely matters of law, it seems to me that I ought to see this too.  Once I have read those documents, I will be seeking a meeting with the Attorney-General and other relevant Ministers to discuss any concerns that I may have at that point.

Lastly, the Political Declaration is but a few hours old, so I will need to better familiarise myself with its contents and implications before commenting further.

This is the most consequential decision any Member of Parliament is ever likely to make.  At this monumental moment, I believe constituents expect their MP to carefully consider all factors and come to a decision which I believe to be in their, and crucially the country’s, best interests.