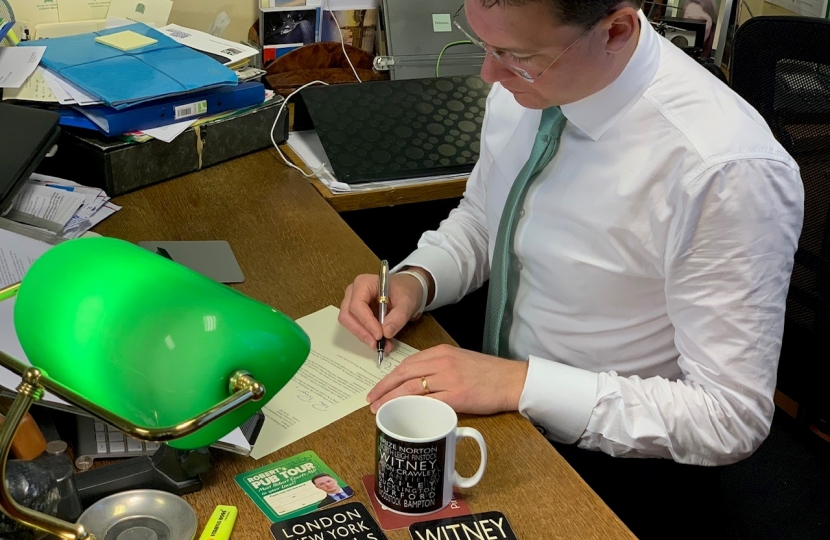 Robert has written to the Chief Executive of Thames Water, Sarah Bentley, to demand full details of how the company will ensure compliance with the new legal duties introduced by the Environment Act.

The landmark Environment Act, which received Royal Assent earlier this month, introduces a range of new legal duties on water companies to tackle sewage spills, including:

The new monitoring requirements already appear to be bearing fruit, with several water companies revealing that many of their sewage treatment works may not be compliant just before the installation of new monitors. This would mean that water companies are in breach of their permits and failing to meet their legal duties, and has prompted the launch of a major investigation by the Environment Agency.

The Environment Agency is now looking into all water and sewerage companies to assess the scale of the problem. This will see an investigation involving more than 2000 sewage treatment works. Any company caught breaching their legal permits could face enforcement action, including fines and prosecutions. Fines can be up to 10% of annual turnover for civil cases, or unlimited in criminal proceedings.

Robert has also written to the Chief Executive of the Environment Agency to request a meeting to discuss the investigation further, with a particular view to alleged illegal spills in West Oxfordshire's rivers.

In his letter to Thames Water, Robert has demanded full details of the company’s plans to ensure compliance with the new duties imposed by the Environment Act and has also said that he wants to see more investment in local infrastructure improvements and less on payouts to company shareholders.

Commenting, Robert said: “The Environment Act puts in place more protections against water pollution than ever before and will make a real difference in tackling the use of storm overflows. I want to see what plans Thames Water have in place to ensure compliance with these new duties.

“We in West Oxfordshrie are clear that we want to see far greater investment in better local infrastructure and far less on payouts to shareholders. We need an urgent commitment from Thames Water to invest in the infrastructure upgrades our area needs to reduce storm overflows.

“Following my recent Water Action Day we have seen important works undertaken to resolve issues in villages such as Clanfield and Tackley. But this is just the beginning – we need ugrades right across West Oxfordshire’s network and I will keep the pressure on Thames Water until these are delivered.”

You can read Robert's letter in full through the link below.