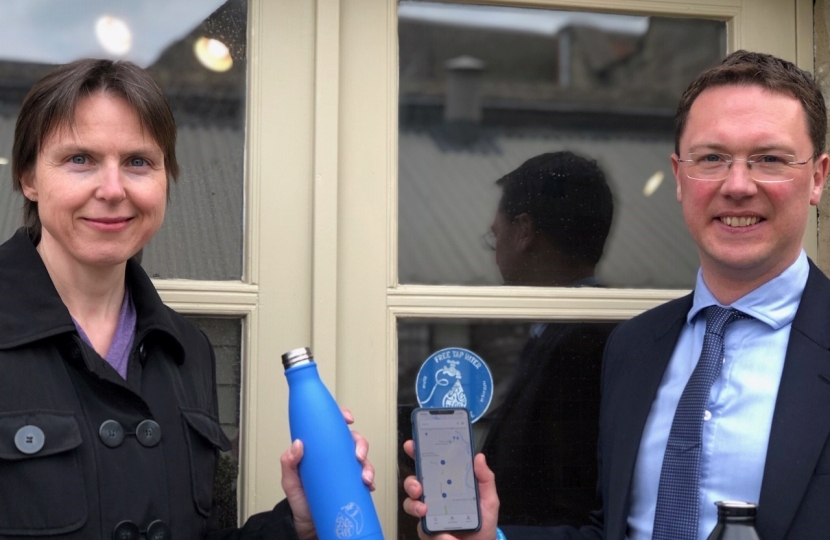 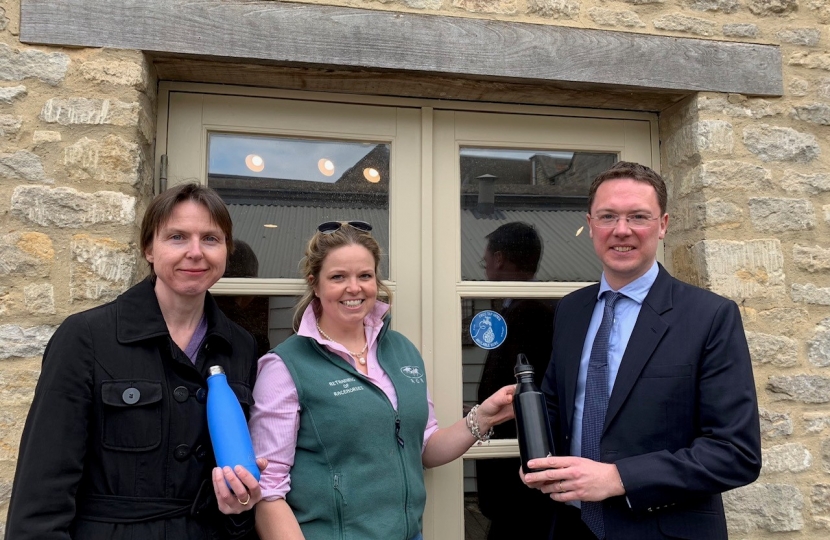 Robert has welcomed the early success of a new campaign aimed at promoting the use of refillable water bottles in West Oxfordshire. Robert met with Dr Helen Gavin of Eynsham, who is leading the ‘Refill West Oxfordshire’ Campaign, at the participating Blanket Hall in Witney to discuss the progress of the campaign.

The Refill West Oxfordshire initiative is part of the wider national Refill Project, an award-winning campaign to reduce plastic pollution. In West Oxfordshire, it has already won the backing of many local businesses who have agreed to act as a refill point for people with reusable water bottles.

The aim is to reduce the amount of single-use plastic waste by creating a network of local ‘refill stations’ across West Oxfordshire. A refill station is a pub, café or other business that is happy to fill up an existing water bottle from the tap for free. Participating businesses are shown on an app and can also decide to display a sticker in their window to help people find them. The local campaign began in Eynsham, with Helen and Robert encouraging local businesses to join the scheme and is spreading outwards. In Witney, the historic Blanket Hall café was keen to sign up.

Many more people are now choosing to carry a refillable water bottle as an environmentally friendly alternative to buying water in single use plastic bottles. The ‘Refill’ app for smartphones provides a mapped network of over 14,000 refill stations in the UK. The app can also measure personal impact by noting the number of bottles saved from landfill and the related carbon reduction.

The Refill app can be downloaded for free on Google Play or the App Store. Anyone wanting to get in touch, to find out more about Refill, or to sign up or support the campaign, is encouraged to email Helen Gavin at WestOxonRefill@gmail.com.

Helen Gavin said “There are easy things that people can do to help reduce plastic pollution and be a bit greener in their everyday lives: reusing a water bottle is one of them!  I am proud that so many businesses want to play a role and help us all to keep hydrated and reduce waste. I hope many more cafes, pubs and similar outlets in West Oxfordshire will get in touch to find out more about this great initiative.”

Eleanor Martin, of the Witney Blanket Hall, said: “At Witney Blanket Hall we are all about wool and natural fibres so of course we want to do our bit for the environment. We are delighted to be supporting this campaign and hope that many other businesses will follow suit. We very much look forward to welcoming visitors to the Hall to browse, shop, eat and of course fill their water bottle.”

Robert said: “Well done to Helen and the Refill West Oxfordshire campaign for working so hard on this important initiative.  It is very encouraging to hear how many of West Oxfordshire’s businesses have signed up to be a refill station and are helping support our area in its commitment to tackling climate change.

“The facts about single-use plastic water bottles are stark.  4 out of 5 single-use water bottles are not recycled but end up in landfill, incinerators or float out to sea.  UK tap water is tested to much higher standards than bottled and costs less than 0.1p per litre, so there are many reasons to make the switch.”

The Government is working around the clock to support and advise British citizens abroad, and to help them get home. My team and I have already helped a number of local residents to get home, and are in regular contact with several more.