Why I Resigned as PPS over the Chequers Plan 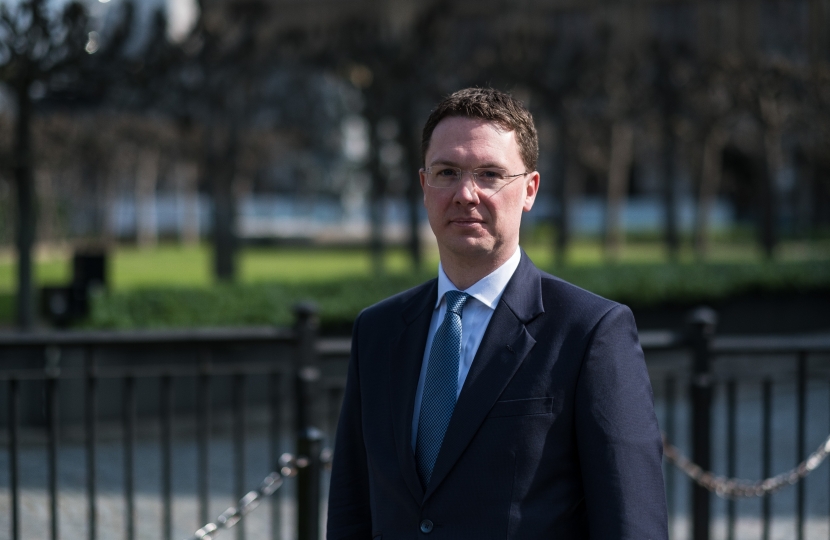 For any MP, to resign from even a junior position as a Parliamentary Private Secretary is a big step: you are part of a team, and a much closer one than many imagine. Your colleagues rely on you, Ministers look to you for help, you all try to pull together to the same end. Then, suddenly, you are saying that on a major issue you cannot support the team and have to leave it. Nobody likes that. Consequently, nobody does it lightly. For colleagues who take a different view from me on this issue, I respect that. They all feel that they are doing the right thing.

For what it is worth, I am quite sure that the Prime Minister and her team are doing what they feel to be right. I do not support a leadership challenge; I support the rest of the Prime Minister’s programme wholeheartedly.

But the whole point of our Parliamentary democracy is that individual MPs are required to scrutinise the proposals of the Executive and, if they cannot support them, to say so. I am urging the Government, even at this late stage, to look again at the policy proposals they have laid out, and to change them. It is not too late.

My decision to leave my Foreign Office PPS role was one that I arrived at having read the White Paper in detail. I was worried by the Chequers statement, but I waited to read the full White Paper. Having done so, I do not feel that I can look my constituents in the eye and tell them that I think it is in their best interests. My role as an MP is to use my own judgment, having considered all the issues, not simply to toe the party line if I do not feel that it is in my constituents’ interests to do so.

At the outset, it is worth reminding ourselves that the view we take of the White Paper should have nothing to do with whether you voted Leave or Remain in the referendum. That vote was two years ago. The decision has been made. For my own part, as the first post-referendum MP, I am more interested in trying to bring people together than in refighting old battles or justifying a position I took in the past. What I have to do is to consider whether or not what is proposed in the White Paper is in the interests of the people of West Oxfordshire and the wider UK. And yes, I want a country that is free, tolerant and open – with close links to Europe – but that does have to be achieved in a way that provides for properly accountable democratic government in the future.

I am not going to utter the phrase “fulfil the wishes of the British people.” I know that is controversial. What I want to do is to lay out why I feel that the proposals in the White Paper should be rejected, whether you voted Leave or Remain.

Firstly, we have said we will agree a “common rulebook” with the EU. But we should be clear: this is their rulebook, not ours. It is not one that we will have sat down and agreed together. The White Paper tells us this at page 8, where we are told “the UK would make an upfront choice to commit by treaty to ongoing harmonisation with the relevant EU rules.” So, new EU rules will be applied in the same way as before – if by way of treaty choice rather than EU membership – and the UK will not have a vote or a veto, only (see pages 87 and 89,) the ability to “share its views with the EU” and to “formal consultation.”

The Government seeks to reassure us that this acceptance of existing and future EU laws is compatible with a promise to take back control of our laws, by emphasising Parliamentary scrutiny of new EU laws. These will be brought into domestic law by statute in much the same way as the old European Communities Act 1972. But one only has to look at the lack of success in changing EU laws over the last forty years to see how successful that is likely to be. But at least, then, we were members of the Union. In future, we would not be and, whilst Parliament – p95 – could ultimately decide not to pass the legislation, it would be in the knowledge that there would be “consequences” such as for market access, border frictions, or security co-operation. It is therefore vanishingly unlikely that Parliament would ever refuse to enact future EU laws.

The Government further seeks to assure us that the proposed institutional framework will give Britain the ability to diverge on regulations contained in the ‘common rulebook” in the future if wished. This is openly described as being part of an “Association Agreement” – like Moldova’s. In the case of a dispute between the UK and the EU, an arbitration panel would rule on the matter. But we have accepted that the European Court – the CJEU – is the sole arbiter of EU law. The panel – p93 – would have to refer to the CJEU for an interpretation, and would then have to “resolve the dispute in a way that was consistent with this interpretation.”

Therefore, whilst the Government will say that the jurisdiction of the ECJ / CJEU is ending in Britain, this is only true in name. The direct ability to refer a case to that Court will end, but its overriding supremacy will continue, not just in the narrow area of goods exported to the EU, but in any sphere that might be held by this most political and integrationist of courts to be relevant to how those goods are produced, and elsewhere the White Paper suggests that these rules could extend to environmental, social and employment laws.

With the best will in the world, it is therefore difficult to see how this proposal amounts to taking back control of the UK’s laws. We will be subject, in the goods sphere at the very least, to the EU’s laws, overseen by the EU’s Court, and with no way of objecting, save divergence at the cost of market access or being fined. The EU has managed to have more balanced arbitration arrangements than this with other states, and yet Britain has managed to give this point away as an opening stance.

I will be told that this approach is part of what was necessary in order to solve the Irish border issue. This is an issue that has been shamelessly weaponised by the European Commission. The Northern Irish border is currently a VAT border, a currency border, a national border – among others. It does not have physical infrastructure. It does not need it. Neither our HMRC Chief Executive, nor his Irish counterpart intend to put any up. What checks are required for customs purposes can be carried out by a combination of trusted trader schemes and technology – what has been called “max fac.”

I am aware that this approach has been criticised by some commentators and that this is why the Government has come up with its FCA (“Facilitated Customs Arrangement”) plan as a way of showing that the UK can be an independent trading nation post-Brexit. But herein lies one of the internal contradictions of the White Paper. The UK is essentially to remain as part of a combined customs territory with the EU. The same tariffs will apply on the common external border for the whole EU and UK but with the caveat – in order for the UK to at least try to sign new trade deals in the rest of the world – that goods coming into the UK and destined solely for the UK market can have a different tariff applied, which traders have to claim back. Assuming that is bureaucratically workable, the Government seems to argue – p17 – that some elements of trusted trader schemes can be used.

Let’s be clear about that: a solution that has been deemed not to be suitable for solving the relatively limited issues at the Irish border under a “standard” free trade agreement are now being proposed for managing the entirety of UK-EU trade under FAC.

If that were not enough, the White Paper envisages that we are to collect customs dues on behalf of the EU for goods coming into the UK but destined for Europe. Fine. But the EU is not required to collect those on behalf of the UK for goods coming into Europe but destined for the UK. A loss to the Exchequer, certainly, but is that the position of an independent state trading as an equal with a close friend and partner?

And if this all works, the whole customs scheme forgets the fact that tariffs are no longer the main barrier to world trade, being replaced by non-tariff regulatory barriers. And as explained above, we have accepted all of those as part of the “common rulebook”, severely limiting any ability to sign external trade deals in any event.

And so when we consider all the above alone which deals only with laws – without even looking at any other areas of concern – what are we to make of the White Paper? Does it indeed take back control of our laws? I cannot say with any confidence that it does. Rather, it puts us in the position of being, essentially, a member of the European Union but without a vote. Paying for the privilege, obeying its laws and adjudicated by its Court: but without a veto, or even, other than the vain lobbying of representatives, much of a say. The worst of all worlds. This is deeply damaging to Britain’s democracy and even its political freedom – something that I care about protecting deeply.

Worse still, it would be one thing if, after having started tough and negotiating hard, the Government had come back and said that that was the best that could be done. That might then be acceptable. But it is not. This is just the beginning, the first taste of a series of further concessions that will be expected of us until we capitulate. We know that, because that is what happened to Greece.

And yes, there is an alternative. It is the similar White Paper to this one, drawn up by David Davis’ Department before the insertion of wholly different paragraphs to change its meaning and its aim. You can read it on the ConservativeHome website. It requires the Government to approach Brexit with a view of opportunity and optimism, but with serious preparation for a no-deal scenario to prove credibly that we are not simply going to take whatever is on offer, no matter how dire, but that we are a proud independent country that wants friendship, close co-operation based on mutual recognition of standards and lots of trading links – but that we are not going to be taken for a ride.

But above all, the Government’s new approach must be one of self-confidence, and treating Brexit as an opportunity to be grasped, of restoring the control of our elected politicians over the rules that govern us and the choices that they make. The British people are tough, tolerant and optimistic. But they do expect their leaders to fight for them. That is what the Government needs to do now.