Why I Will be Voting Against the UK-EU Withdrawal Agreement 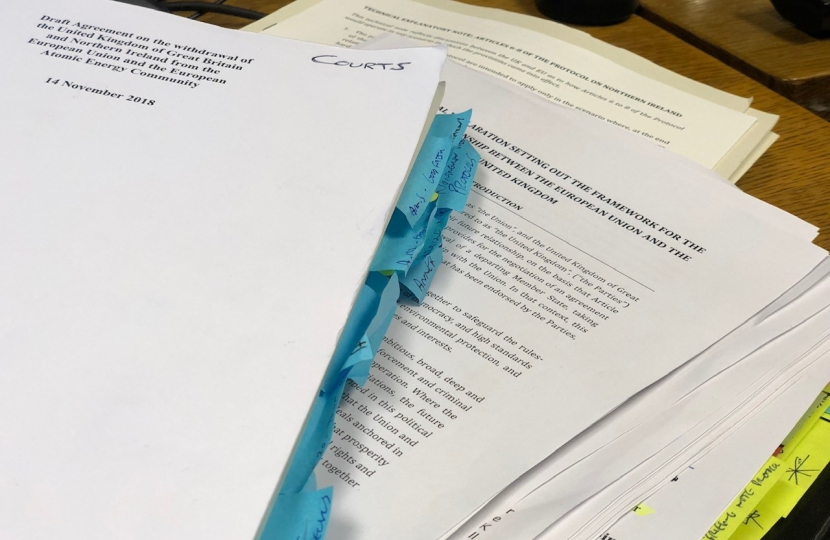 Thank you to everyone who has written to me about the Prime Minister’s UK-EU Withdrawal Agreement, and the meaningful vote that will take place in Parliament tonight.

I have received a wide range of correspondence, covering the full spectrum of opinion from remaining in the EU after all - whether with or without a further referendum - through accepting the Prime Minister’s deal to leaving without an agreement at all. It is fair to say that views are very split.

I am acutely aware that whatever position I took on the Agreement there were always going to be people unhappy with my decision. But whilst I cannot satisfy everyone, I can do my duty for everyone by looking dispassionately at what is on the table and employing my judgement as to whether it is in the interests of our country, and our constituency.

I cannot in good conscience say that signing up to the Withdrawal Agreement, in its current form, is in our best interests and I will therefore be voting against it tonight.

At the time, I gave the Prime Minister my support in her efforts, in further talks with EU leaders, to deliver the legally-binding assurances to the backstop that were pledged to MPs. Sadly, what has actually been achieved - namely an exchange of letters - falls some way short of a legally-binding assurance. My concerns therefore remain unaddressed.

I cannot emphasise enough: I do not criticise this deal on the basis that it is not perfect, nor is my objection based on ideological purity. I am a pragmatist and I want to see a deal and compromise as much as anybody.

But I cannot agree to just anything. There does come a time when a compromise becomes a compromise too far, and which undermine fundamental principles such as those of national sovereignty and democratic accountability.

I cannot acquiesce in putting my country into a position where her destiny rests in the hands of another.

It has been a trying few weeks in Parliament, with intensive lobbying operations being undertaken. Throughout this process, I have not aligned myself to any faction – thinking it right for me to use my own judgement as to what is in the best interests of my constituents.

I will continue to do the same in the coming weeks and months as we seek to steer our country through the choppy waters ahead and towards a more democratic, free and prosperous future.