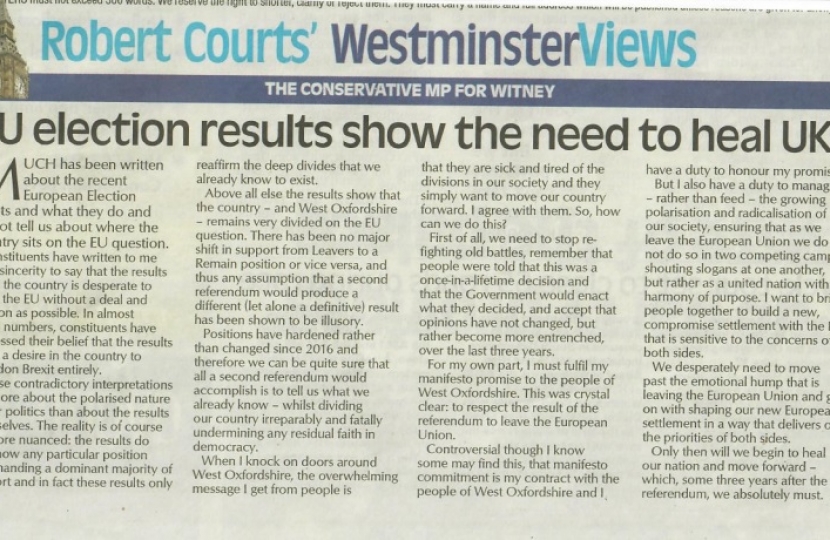 These contradictory interpretations say more about the polarised nature of our politics than about the results themselves. The reality is of course far more nuanced: the results do not show any particular position commanding a dominant majority of support and in fact these results only reaffirm the deep divides that we already know to exist.

Above all else the results show that the country - and West Oxfordshire - remains very divided on the EU question. There has been no major shift in support from Leavers to a Remain position or vice versa, and thus any assumption that a second referendum would produce a different (let alone a definitive) result has been shown to be illusory.

Positions have hardened rather than changed since 2016 and therefore we can be quite sure that all a second referendum would accomplish is to tell us what we already know - whilst dividing our country irreparably and fatally undermining any residual faith in democracy.

When I knock on doors around West Oxfordshire, the overwhelming message I get from people is that they are sick and tired of the divisions in our society and they simply want to move our country forward. I agree with them. So, how can we do this?

First of all, we need to stop refighting old battles, remember that people were told that this was a once in a lifetime decision and that the Government would enact what they decided, and accept that opinions have not changed, but rather become more entrenched, over the last three years.

But I also have a duty to manage – rather than feed - the growing polarisation and radicalisation of our society, ensuring that as we leave the European Union we do not do so in two competing camps shouting slogans at one another, but rather as a united nation with harmony of purpose. I want to bring people together to build a new, compromise settlement with the EU that is sensitive to the concerns of both sides.

We desperately need to move past the emotional hump that is leaving the European Union and get on with shaping our new European settlement in a way that delivers on the priorities of both sides.

Only then will we begin to heal our nation and move forward - which, some three years after the referendum, we absolutely must.