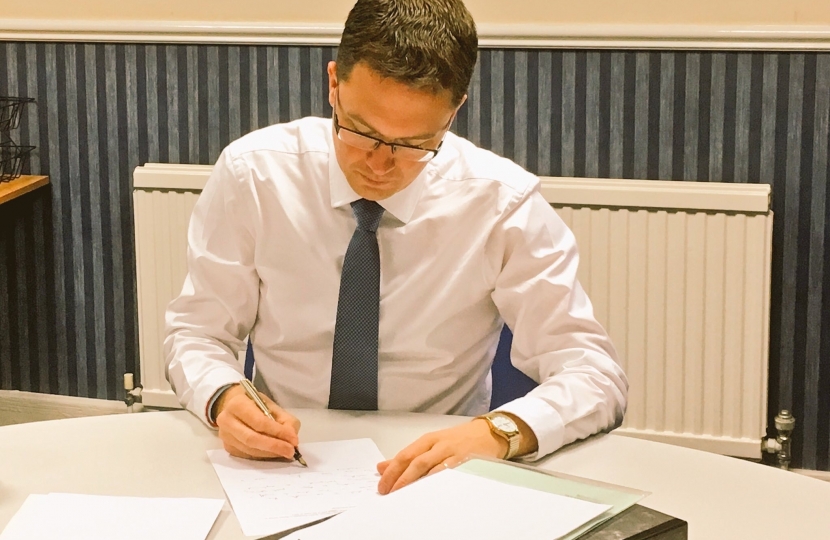 The below open letter featured in the Witney Gazette on 19th December 2018.

I write at the end of a dramatic week in Westminster – certainly the most I have yet experienced.  More senior colleagues feel the same.  Such is the relentless pace of events there is every chance that the contents of this open letter will have been overtaken by the time of your reading it.

Let’s start by rewinding to last Monday morning, as I prepared to speak in the big debate on the EU Withdrawal Agreement.  I would have had to say, reluctantly, that I would vote against the “deal” as it currently stands.  I say this for the following reasons.

The Withdrawal Agreement’s backstop is a trap from which we cannot unilaterally escape and which cuts off Northern Ireland from the rest of the country. This is quite clear on a reading of the document but the Attorney General’s legal advice removes any doubt.

The EU will have the right to impose laws on the UK indefinitely and an effective veto on ending this subordinate position.  As even committed Remainers like Jo Johnson and Sam Gyimah have observed, the Withdrawal Agreement also removes almost all of the UK’s negotiating leverage and means that the next phase of talks will be dictated by the EU which will, not unreasonably, aggressively pursue its own interests.

The referendum result was about taking control of our destiny.  Sadly, this Agreement – as it currently stands - does the very opposite.

As it happened, the Prime Minister took the decision to delay Tuesday’s vote as she headed back to Brussels to seek amendments to her deal.  The debate in which I intended to speak was therefore cancelled.

Fast forward to Wednesday morning, as news began to break that Sir Graham Brady, Chairman of the 1922 Committee, had received the 48 letters required to trigger a vote of confidence in the Prime Minister’s leadership.  Thus began an ill-tempered, high-intensity day of parliamentary wranglings.

It is now clear that the Conservative Party does have confidence in the Prime Minister’s leadership.  With that settled, it is for all colleagues to come together and provide the country with the unity it is crying out for.

The Prime Minister has my full support in seeking legally-binding changes to the backstop which ensures a good, compromise agreement with the EU that I and others are able to support.

The fluidity of events are such that it is impossible to predict where we will be at the end of this week, but we can be sure that MPs will face some very difficult decisions in the coming weeks.

Whilst it is for us all to stand up to that challenge and steer our country through, I for one will never forget that we need to look to the future, with optimism and a spirit of understanding and hope – and to bring our country back together again.  Let’s all agree on that – and may I, on that note, wish you all a Happy Christmas and New Year.