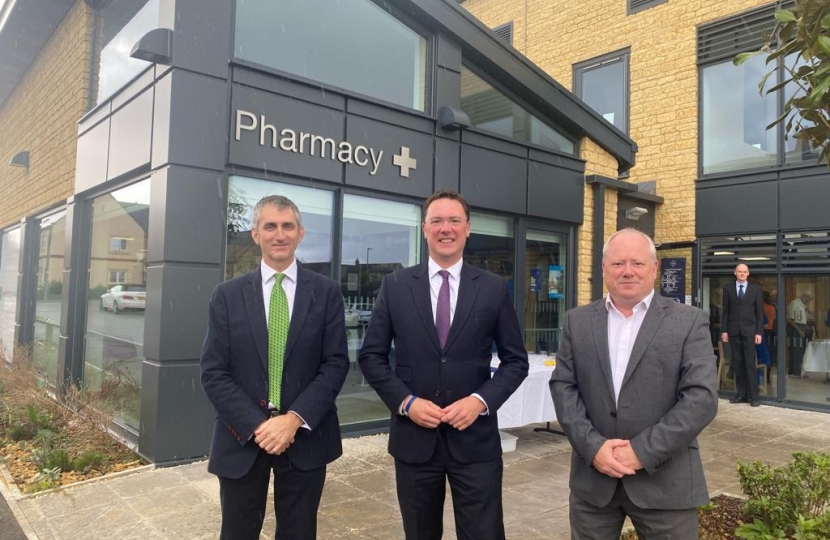 He joined doctors, staff and representatives from builder Pye Homes at the event which had to be delayed due to Covid.

The new surgery, part of the new Hanborough Gate development, is roughly twice the size of the old Long Hanborough Surgery, with six consulting rooms plus a number of treatment rooms.

Pye Homes reinforced the pharmacy floor to accommodate a one-tonne robot, which automates the storage, dispensing, return, restocking and crediting of medications.

“The surgery is another fantastic example of what can be achieved when developers and local people come together to create vibrant new communities,” said Mr Courts.

“The facilities here allow the doctors to see more patients and provide even better levels of treatment and care in a purpose-built surgery designed to serve the community for many years to come.”

The complex was built using energy-efficient construction methods and includes modern offices and facilities for the staff, as well as a meeting room and ample parking for patients.

Graham Flint, MD Pye Homes, said: “We are really proud of what we have achieved with the Hanborough Surgery, it is a community facility that has been widely acclaimed.

“We promised the community we were going to improve their facilities, which is exactly what we have done with this new surgery."

The surgery opened in March and has been among the highest vaccinating sites in Oxfordshire.

Dr Neil Rust, Senior Partner, Eynsham Medical Practice, said: “The surgery has transformed our working, it has lifted everyone’s spirits and given us more space and light and it has made it easier to respond to the demands of the growing population and the pandemic."

The Right Homes, in the Right Place

I know we all agree that West Oxfordshire needs more affordable homes - to rent or buy.  However, these new homes must be at the right price in the right place, and any new development must come with the extra infrastructure needed to support it.