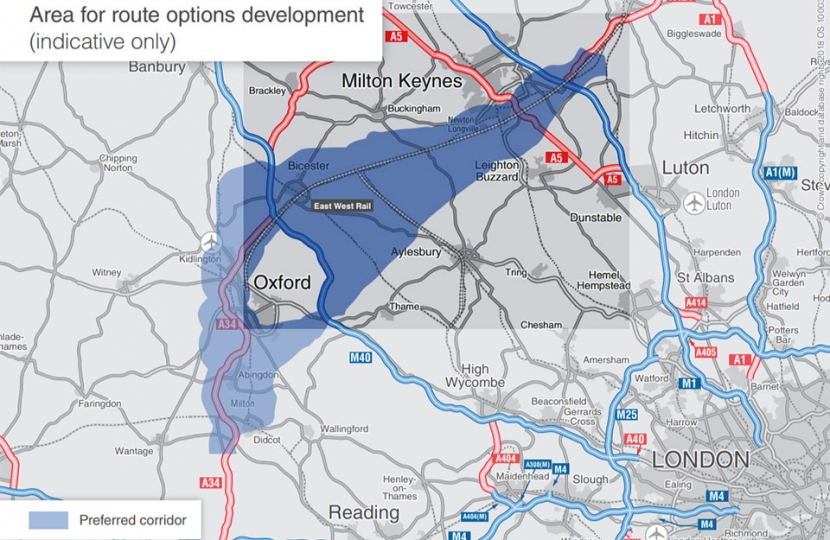 Today, Roads Minister Jesse Norman announced the chosen central corridor for the Oxford to Cambridge Expressway.  This will link together fast-growing technology hotspots, building on plans already in motion, such as East/West Rail.

Three corridors were proposed and scrutinised by Highways England, with Corridor B judged to provide the greater benefits for the region.  The expressway with therefore go either east or west of Oxford and follow closely alongside the East/West rail link.

A full public consultation will be held next year, in which residents and businesses in and around the corridor will have their say on a more detailed, specific route design.

Robert said, "The Government has today announced a corridor for the Oxford-Cambridge expressway. This is a welcome step, as it offers more certainty to Oxfordshire. This is, however, only the first step in what will be a long process: there will soon be a public consultation on the precise route. I would encourage everybody to take part to ensure West Oxfordshire’s views are heard, and to give us the best chance of obtaining all possible benefits from this project in terms of much-needed local infrastructure investment.

"The corridor appears to follow an efficient route using existing infrastructure: following along the East-West railway line, it would join up and improve existing road and rail, rather than creating an entirely new route. This appears to be a good logical fit, as well as minimising cost. The project offers potentially significant benefits for West Oxfordshire, which we must work to secure, including reduced journey times and less congestion on existing routes, as well as strengthening the case for improvements on feeder roads such as the A40 and A34.

"I will be examining the proposals in detail and will be making sure that West Oxfordshire residents have a strong voice in this process. There will be many issues to consider, such as the environmental impact of different routes, and I will want to ensure that everyone’s views are heard and considered."

Find out more information about the Oxford–Cambridge Expressway here and read the Department for Transport announcement about this proposal here.