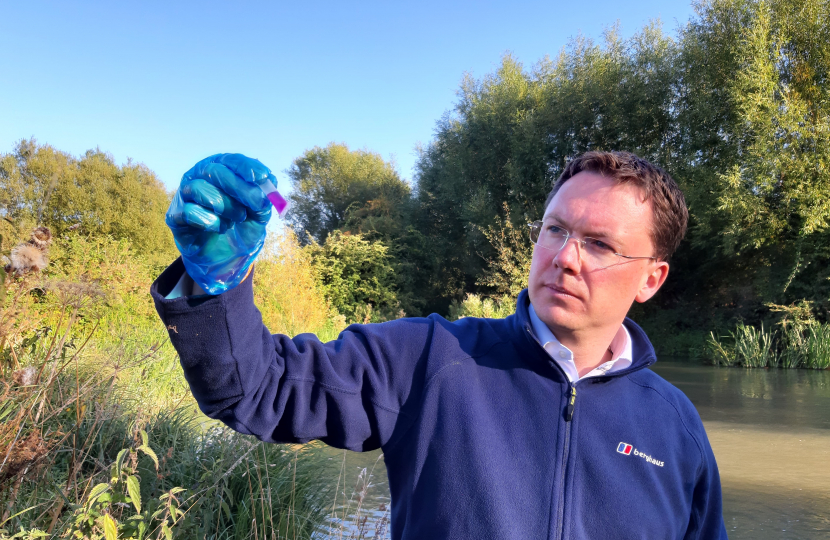 The Government is today launching its consultation on the Storm Overflows Discharge Reduction Plan, which proposes transformational changes to our sewage system, ensuring a significant reduction in the use of storm overflows.

Under the plans, water companies will face strict limits on when they can use storm overflows and must completely eliminate the harm any storm sewage discharges cause to the environment.

The consultation on the Storm Overflows Discharge Reduction Plan outlines a step change in how water companies tackle the number of discharges of untreated sewage, which Robert, the Government and the public have made clear are completely unacceptable.

Storm overflows are a feature of our Victorian sewerage infrastructure designed to act as a safety valve to release wastewater into rivers or the sea to prevent sewage from backing up into streets and homes during heavy rainfall events. This system has been in operation for over a century but, due to a growing population and heavier storms because of climate change, the frequency of discharges has increased and sadly they have become routine events across the country.

For the first time, a government has committed to transforming this century-old sewerage system and is taking action to do so.

Today, the Government has published plans to set clear and enforceable targets that the water industry must meet to significantly reduce storm overflows and ensure they are used only in exceptional circumstances.

A consultation has been launched on the plans set out today, which you can respond to here.

The consultation will be open for six weeks and the responses received will inform the Storm Overflow Discharge Reduction Plan which, under the terms of the Environment Act, the Government has a duty to publish by September.

Under the proposed plan:

The consultation outlines how water companies are expected to achieve these targets, including mapping their sewer networks, reducing surface water connections and engaging in long-term collaborative planning.

It also details how government will hold to account those companies who do not meet expectations, including a new monitoring and reporting framework as legislated for in the Environment Act which will significantly improve the ability of both Ofwat and the Environment Agency to take enforcement action where needed.

Commenting on the announcement, Robert said: "I am clear that routine discharges of sewage are unacceptable – and so are the people of West Oxfordshire. That is why I have been leading the campaign to tackle the use of storm overflows and ensure we protect our precious rivers.

“The consultation announced today by the Government is a huge step in the right direction – in fact we are the first Government to set out our expectations that water companies must take steps to significantly reduce storm overflows.

“The measures being consulted on today represent the largest programme to tackle storm sewage discharges in history. Transforming an over century-old system will not happen overnight, but it is clear that the necessary action is being taken to ensure that water companies significantly reduce the use of storm overflows and end the environmental harm caused by sewage discharges."

The main measures under consultation are: